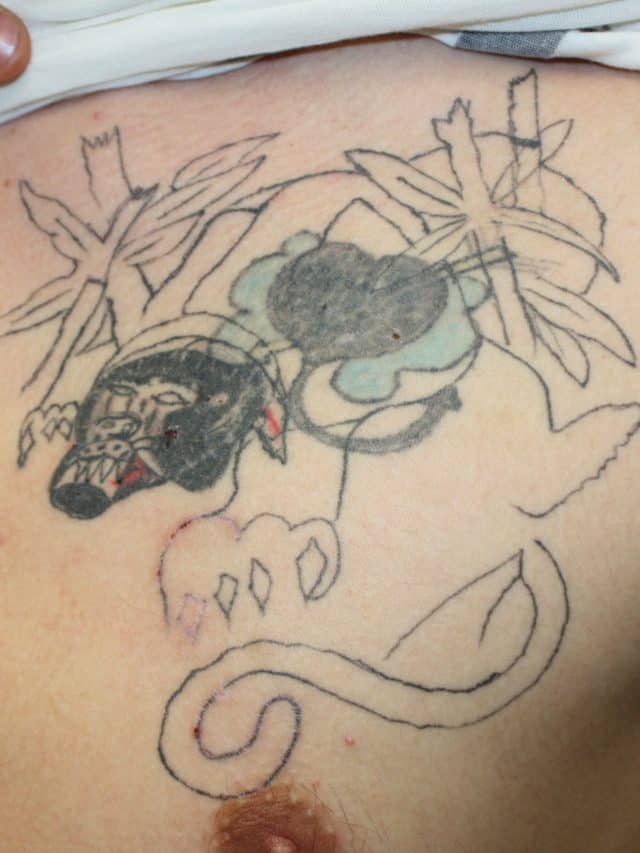 BUBBLEGUM iNK ®, COVERING UP OTHER STUDIOS CR@P TATTOOS SINCE 2004

Over our tattooing life span, we have covered over some truly horrendous tattoos done by other studios and from people just having a go with a ‘kit’ they bought off ebay.

Spur of the moment drunken Blackpool special, a loved ones name, who is now despised because they got off with your best friend, a dare tatto, that now affecting your new found lifestyle.  Literally ive covered up everything, the list would be too extensive, but such favourites,…mmm…..a girl who had a large number for the amount of guys she had slept with in ‘MAGA’, there loads and most of the time the YOLO attitude or drugs or drink spur us on to get, what at the time, may be the best tattoo ever, but as life carries on and takes deviations, those tattoos may be coming back to haunt you.

Our talented artist can sort them out!

Read on for more on the subject.

Covering over that bad mistake !

There are a vast majority of tattoo studios that won’t coverup tattoos. We love it. The thing is because either the tattooist or your mate in the kitchen did a very poor job of your tattoo, doesn’t mean that you have to live with it forever.

Here are some great examples of some of the stories attached to some really bad tattoos and one of the most horrendous tattoos we have ever seen !

The above image is of a guy whose mate said he could cover over the heart with a tiger coming through the bamboo. Alcohol had a hand to play in these escapades. he’d been refused at multiple studios to get it covered up. We sorted it out and after some remedial laser treatment to get the gnarly bits out of the way, we covered it up with some old school design work.

Just because your mate has hands and can doodle a funny cat very now and again, doesn’t mean that the tattoo machine he bought of eBay is going to thrust him into the tattooing spotlight. I can’t see David Beckham knocking on his door and getting him to clear away the beer cans, so he can get a smoking cheap tattoo off the new boy wonder.

This client came in, still worse for wear on an early Monday morning. He worked a high profile job doing mortgages, but has got skittled at a party over the week end. His ‘mates’ thought it would be a laugh to start playing with someone newly acquired eBay kit and as he was passed out he seemed like the best candidate.  So they scrawled f##k work on his knuckles. there is this guy hung over in the shop, having a proper panic, shirt and tie, wondering what he’s going to do about getting shot of these in the next couple of hrs. Well they were properly dug in, so the best course of action was for him to keep them dosed up in Sudacrem.

Bepanthen will heal a tattoo perfect, yet Sudacrem is like a tattoos nightmare. it will pull the ink out as fast as it can and leave you fairly tattoo less. So good advice there folks, if ya wake up with a giant phallic symbol tattooed on your head, get the sudacream out first thing.

Now Ive done some really stupid things in my time, pissed up naked cliff diving in the pitch black being one that comes to mind, or seeing if you could live on a diet of pure trifle for 7 days and nothing else and getting diabetes, but the next guy takes the biscuit.  A guy comes in with crap scrawled over his face and i don’t mean a little bit. He had some half arsed attempts of the Mike Tyson tattoo on both sides of his face. In tow was a livid mother. He’s never had a tattoo, but what with Christmas just passing, his mate and him went out on the jollies. Bladdered they stumble in and hey presto out comes the eBay tattoo kit.

No not satisfied with tattooing ‘ I love kerbs’ or some other random comment on some hidden part of his body, in his ten men stupor, its the Tyson tattoo or nothing. So his drooling mate, who’s never tattooed or even drawn anything, starts ramming ink in his mates face, all the while taking blurry direction from good old YouTube. It didn’t go well, he’d even colored his eyelid in ! So to try and stop every one falling out, drunken tattoo master, says he’ll make it better by doing the other side…..Freehand.

Ffs, what a mess, his ma was going psycho and the worst was, we couldn’t do anything, why? He was 17 !! tattoos and laser are all over 18.

Maybe as George Micheal said, some mistakes were built to last.

So stop getting slaughtered and tattooing each other, but if you have been to the blurry side, then come in and see us and we will fix it for you.

THE WORLDS GONE MAD, TAKE ME BACK HOME !